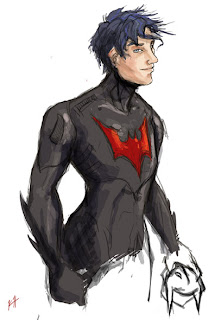 ...Did I seriously just sit down and sketch...Terry... McGinnis real fast?

From Batman Beyond? Okay. So... there's a story that comes behind this. It wasn't just, 'oh I'll scribble Terry from Batman Beyond randomly." No no. A friend of mine commissioned me for a Batman illustration (which I still intend to do) and his rule was it could be anything 'from the Batman comic time-line.'

Understand that the majority of my knowledge for Batman comes from the awesome Batman: The Animated Series from the early 90s (where they didn't even NEED to put the title of the show in the intro, it was THAT good of an opening sequence animation). I did dabble in a bit of the comics but found I couldn't handle the hilarity of them from the 1960s and 70s (like the Batman papa-spank thing). Or his strange relationships with all of his Robins. I do still love Batman though. Which is why I read up on the current DC timeline (I am majorly geeking out here). And that led into a co-worker asking me, 'HEY, remember the Batman Beyond opening? That was the best ever!' and suddenly I was immersed in Wikipedia and found all these crazy cross-overs and things and discovered every Robin (all...3? No wait, now there's 4) has basically gone insane at one point. But now I'm all caught up in the Batman world up to 2010 within the span of two days...aiya.

However, today I found myself looking up an episode of the Justice League cartoon because Terry McGinnis appears in it as an older adult and I cringed at his facial design. I finally settled: lets give a small nod of the head to the younger Terry because he looked great and why oh why did they have to mess with his face...

...Or because I think I secretly had a crush on him. And I really should have no excuse as Batman Beyond came out when I was well into the midst of High School...
Posted by Kim Herbst at 11:29 PM 1 comments 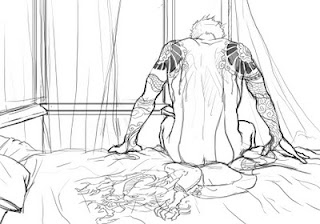 Just a piece I'm in the middle of. I have a ton of work I'm doing, I swear! I'm just not able to post any of it until it gets published, probably in October and then further on. 'Til then, enjoy this sketch.

I like the idea that someone can become so despondent, their very skin turns on them.
Posted by Kim Herbst at 10:06 PM 2 comments 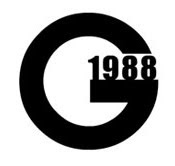 These are super, super high quality Giclee prints, a limited edition of 10 prints, for Ghostbusters, Goonies, and Gremlins.

Also, huge thanks to Regretsy for featuring my Darth Vader BBQ print on their facebook page. There were at least a ton of people clicking the 'Like' button to make me feel not-so-awful for creating such a fun/absurd image! 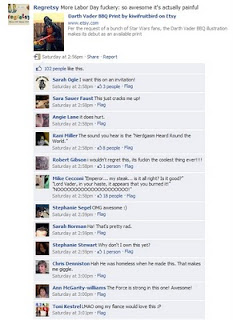