New Legend of Zelda piece to commemorate the 25th year anniversary this year! FINALLY got it done before the year's end too!

The first few Legend of Zelda games didn't have the whole spiritual 'fairy flies around Link, sparkle sparkle' animations. I used to wonder what the heck he did with those fairies to restore his health since he'd touch them and they'd just... disappear. (Legend of Neil depicts Link-Neil having sex with the fairies, but I didn't agree as it wasn't an instantaneous disappearance). But this is what my innocent-child-mind thought: 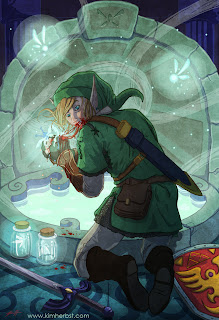 This will be featured in Gallery1988's Video Game Show - invite below: 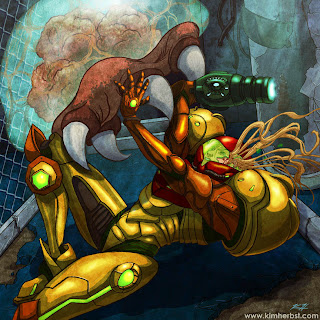 New Metroid piece for the Geekart.net show called "8-Bit Champions" which will be in Paris, France:
September 15th
LA FLAQ GALLERY
36 rue Quincampoix
75005 Paris
Metroid holds a bit of a special place for me. I distinctly remember sitting in my basement as a kid, and watching my older brother play it (majority of original NES games are memories of watching him play it before I actually got my hands on experiencing the game for myself). Right after he'd just beaten the last level, Metroid reveals in the ending that --(ZOMG SPOILER?!?) Samus is actually a female under all that androgynous space-suit looking armor. That really got me, mainly because all of the games I'd been playing up until that point always starred a male character (Super Mario, Legend of Zelda, Mega Man etc.). And this female heroine was extremely awesome!

I tweaked Samus's armor some because it was looking a bit outdated (according to the original NES covers and manual booklets that came with the game).
Posted by Kim Herbst at 12:28 PM 0 comments