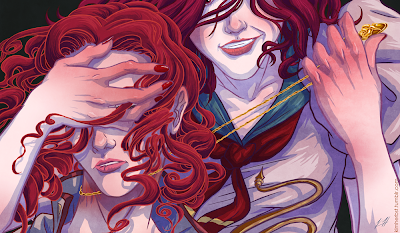 I don’t think I would have survived my adolescence without this series; and it’s not the most popular thing out there so it’s okay if you've never heard of it. It’s 50/50 - you either absolutely love it or completely loathe it.  The show constantly tests the audience and covers a wide range of topics/themes from gender roles, sexuality, that awkward transition between childhood to adulthood, loss of innocence, idealized notions of friendship/love, identity…etc etc etc.

From that, there aren't many characters out there that are as tragically beautiful as Arisugawa Juri. I think the majority of teenagers have experienced unrequited love at one point, and can easily relate to her. She’s an individual who acts serious and confident, and yet is easily one of the most vulnerable individuals as you get to know her. It’s one thing to have an unrequited love; it’s another issue entirely when that love takes advantage of you, manipulates you, and enjoys your suffering. …But being young, and foolish, you don’t know any better and so, so desperately want to help save this person you love for all of the wrong reasons…
Posted by Kim Herbst at 12:30 PM 0 comments 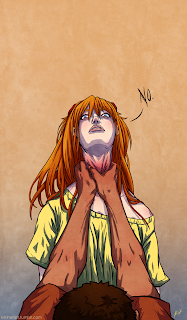 Aiya, forgot to upload this one.  Asuka, from Neon Genesis Evangelion. 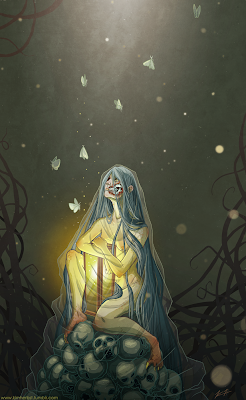 Hel of Helheim will be available for sale at the opening/launch party of Claw Claw Design in Brooklyn, NY, October 12th (the same weekend of NY Comic-Con!) If you live in the area, check out their show, there will be tons of awesome illustrators in it! 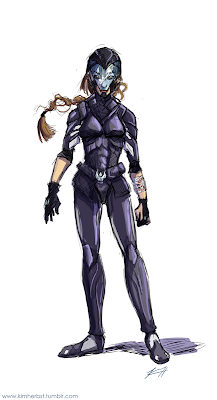 When I first read Mockingjay, part 3 of the Hunger Games, and came across the part of Katniss's mockingjay armor... I'll be honest. In my mind I thought it was the dumbest thing. Ever. Don't get me wrong, I love Katniss and the concept of it all but my mind couldn't get over the lil description.

'It had well placed body armor,' 'totally utilitarian' and 'the swoop of the helmet' 'the curve of the breastplate' blah blah blah. The thing only came to the elbows, and had loose fabric to show off white stripes under the arms that was reminiscent of the namesake bird.

So when I did an image search for her armor, I was genuinely surprised to find barely anyone had done a take on it. Also not a single one had the helmet described (that I found, anyhow).  So I decided to sketch up not only what was roughly detailed in the book, but also something that I didn't find too silly looking and would enjoy.

This was a stupidly difficult task.
Posted by Kim Herbst at 7:56 AM 0 comments 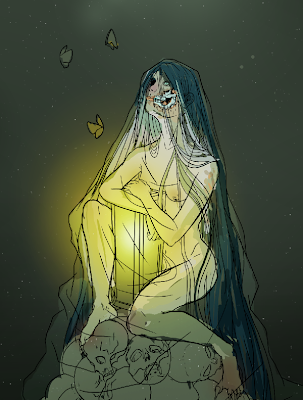 The sketches I did a few weeks ago reminded me of the Norse goddess of death. Figured I'd take her to completion.
Posted by Kim Herbst at 4:35 PM 0 comments