This is either a man that's drowning, or a man that's juuuust reached the surface and taken that great big breath of fresh oxygen. I'm in that very position right now; I can't tell which of these actions I'm experiencing. 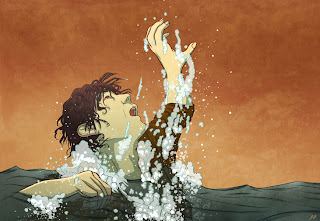 I'll be in San Francisco until around the New Year for a contract position that will hopefully turn into a permanent full-time job. This means: Kim can't update her blog as often over the next month. This also means: Kim will most probably relocate from the East Coast in Brooklyn, NY, to the West Coast in San Francisco, CA.

NYC, it's been awesome/crazy these past two years, but you sadly didn't show me enough love when I needed it most! Cheers!
Posted by Unknown at 5:40 PM 4 comments

...are really hard. The other day I was commended by a friend, as she was impressed I've been in such a relationship for the past year and a half. It's not what either of us would want, mind you, but life happens and the circumstances will change in the coming weeks.

Needless to say, this personal illustration is generally what I feel if I dwell on the subject a bit too long. ...Or if a friend keeps asking when he's coming back. Or when someone looks at me incredulously when they're informed he's been abroad for over a year. ...Or if I see other couples holding hands and embracing one another. ...List can go on 'n on...
Posted by Unknown at 5:51 PM 6 comments

Much thanks to Alex Mathers for featuring me on Ape on the Moon! It's super exciting and super appreciated. Check it out, there's tons of other great illustrators and artists on there!! 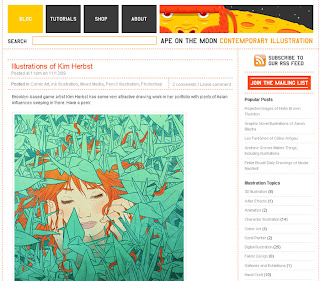 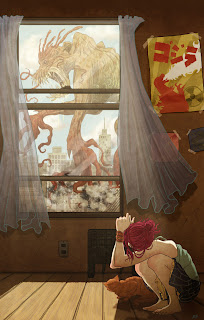 This piece was worked on over the course of the later part of this week. ...It ended up being like three illustrations in one; the monster outside the window, the girl inside the apartment, and then that lil vintage 'gojira!' poster on the wall. Phew!
Posted by Unknown at 9:09 PM 8 comments 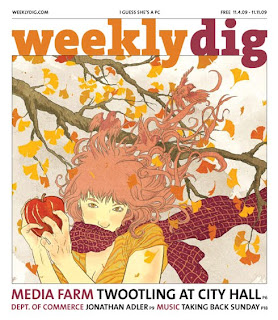 Tak Toyoshima contacted me if my German For Autumn illustration could be used on this week's issue of Boston's Weekly Dig. And 'lo 'n behold, I said yes and now it's on the cover! If you live in the Boston area, pick up a copy; if not, you can download a PDF of the current issue online. Funny they put 'I guess she's a PC' overtop the illustration... I do use a PC!! I really have nothing against apples!!
Posted by Unknown at 11:24 AM 8 comments

If you live in NYC, you can pick up a copy of The Indypendent, the 'free paper for free people!' I had the chance to create a piece for the cover, an article that deals with the procedure of 'hydro-fracking' and how it might be polluting NYC's drinking water.
Here's the illustration as it appears on the cover, and then the original below it: 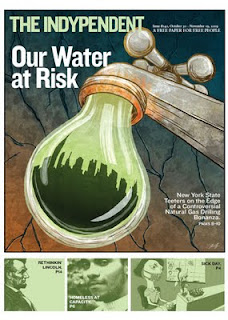 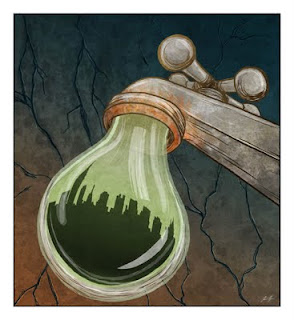