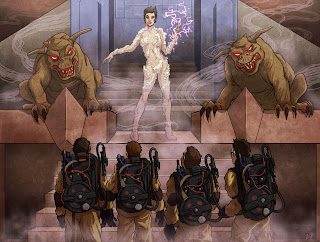 This is for a gallery show in August that focuses on three particular films from the 80s. This one being Ghostbusters. Everyone kept telling me to do the Stay Puft Marshmallow Man, but frankly I was way more interested in Gozer (Stay Puft is still ridiculously awesome though!).

They show Gozer for what, less than two minutes?! As a kid, I was extremely puzzled by her/him/it. Mainly for the fact that it looked like the costume was constructed out of clear Christmas ornaments, hot-glue gun sticks, and spider-webs. Also, I couldn't figure out of it was Gozer's skin considering there were claws on her/his/its hands along with high-heels attached to the feet. ...Were those heels shoes or was that part of Gozer's body? ...I'll never know.

Yeesh. This one took me forever to crank out because so much stuff was going on. Thanks goes out to everyone who came to the Alien/ation show at Space Gallery last weekend! Also, much thanks to Rob Greenleaf for interviewing me on the artprojekt!
Posted by Kim Herbst at 9:15 PM

There are no comments. There is only Zool.