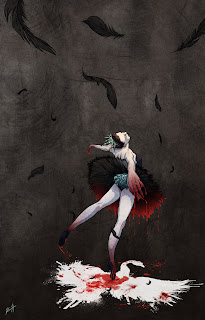 I wish I could have gotten this piece done before the film premiered, but it just wasn't possible. I actually HAVE YET to see this film, but I was so intrigued and mesmerized by the trailer, I had to do an illustration. I mainly wanted to base the imagery on the idea of professions that push human beings beyond their own capacity.

The whole idea of the Black/White swan being played by the same ballerina, having dual personalities, is such a beautiful concept!
Posted by Kim Herbst at 9:53 PM

Haven't seen this either but love the image. Beautiful stuff Kim!

This is gorgeous, Kim

I wanted to wait until I saw the movie to comment and as I expected you nailed it in this illustration. The hands totally make sense and the angle and contrast work really well.

WOW this is gorgeous!!

Your work is incredible.. I still can't get over the movie. Just posted my own Black Swan illustration - was so amazed by the film - needed to get out of my system.

incredible~!! great use of the story and i'm baffled as to how you did so well without seeing the film??? bravo~!!