Girls can be mean. Really mean. If it wasn't true, they wouldn't have made a film depicting how cruel groups of girls can be towards one another properly titled Mean Girls.' 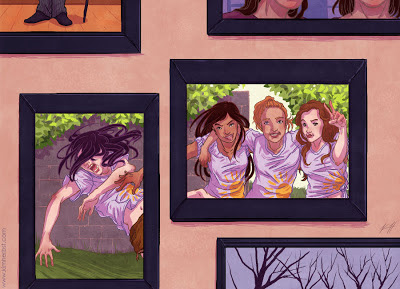 When I was little, I was sent to a sleep-away camp out in the country for two weeks every summer. It was to give my parents a break while they were both working full-time jobs, as well as something for us kids to do while out of school.  Needless to say, I was a very odd child. I didn't really have the same hobbies as other kids. I liked sci-fi and fantasy, I loved a bunch of international cartoons and films no one had heard of, I wasn't very active, and with glasses, my eyesight was shoddy. I was incredibly awkward. There were three girls though, that I befriended that first summer. We all got along pretty well. But they stayed at camp for the full four to six weeks vs. my two.

The following years, the three of them had bonded together far more than I ever had the chance to during the weeks after I'd left the camp. And they became vastly more aware of my awkwardness.  They made it blatantly obvious that they didn't want me hanging around them while at camp as each summer went by, even if we all slept in the same cabin or had the same schedule for activities.  Simply walking off while in mid-sentence, making fun of anything I wore, anything I said, and so on. Years later, I'd confide in my mother about all of this this and she raised the question, "Why did you ask me to keep sending you back there if you hated going there?"  I simply replied, "...I had to keep trying to fit in."

Moral of the story: it's better to be alone than be around people that make you feel alone.