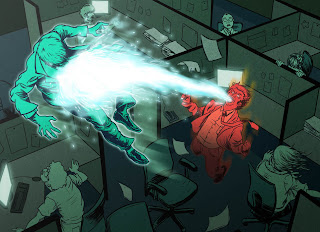 Due to the country's recession, there are new statistics out: people are droppin' the f-bomb A LOT more than usual.

I've never actually worked in a cubicle-style office. I did, however, work in a windowless office upstairs in a factory for 5 months. When the ventilation system broke, it rose to 90+ degrees in there and took over two weeks for someone to finally go through with resolving the problem. I definitely had days where I reacted like this guy during those 2 weeks.

I also read up on the treatment of supposed AIG employees by random people on the street, or polls of what the average American would DO to an AIG employee. Lets just say spitting is pretty high on the list among other actions that would result in far worse bodily harm. They've had to issue new company ID cards to these guys, and they're dressing down to look like regular people just in case. The bankers in England were also taking the same actions due to protestors/riots.

...Aside from all the chaos in the world, enjoy this chaotic illustration!
Posted by Kim Herbst at 10:38 PM

heyo! i realize this is old, but i had to say that every time i stroll through your blog this picture cracks me UP! that is one hardcore f-bomb!