Wow, I have to say I'm pretty darn proud of this one. This is for Illustration Friday! with the theme of the week, 'Flying.' Of course I immediately thought of Icarus who flew too close to the sun, but it was his quote that really got to me: "All limits are self imposed."

My limits are as far as I make them, so I think I went nuts with this one, working for most of the entire day on this as well as yesterday. As a bonus, here's a few work-in-progress images so you can see my process (at least... the process for this particular illustration).

First I start with solid lines, I just refer to them as 'inks.' The flames are there to give me an idea of what style I may do them in, either stylized in the same fashion as the smoke, or something else. 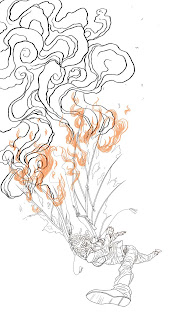 Next comes the background and I place flats on the front elements. The smoke I tinge with a bit of color to remind myself that Hey, I'm putting fire in there somewhere. 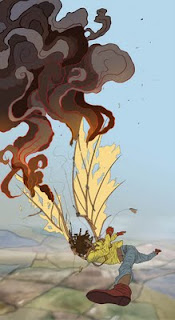 ...And then I accidentally shut that red-tinge layer off. BUT. Now we have more background elements such as clouds, the shadows under them etc. I've also started placing a shadow on the man and his broken wings, with slight color tweaks here and there. 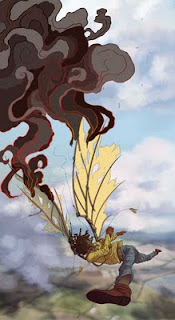 Aaaaand here's the final! Textures are brought in, the flames are painted in, embers are a-flyin' and he's most assuredly falling. 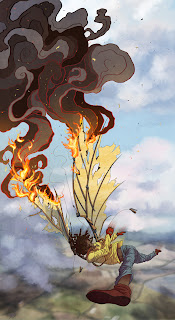 now this is impressive! there just so much movement in the pose and technique in the coloring. i dig it!

Every part of this illustration is great but I especially like the background. The way you painted the ground below slightly covered by clouds is very believable.

amazing work! as was your autumn self portrait and your portfolio!

pretty cool herbst, i like the perspective of the guy.

There is something about the 'inks' version I really like... in a different way that the delightful final result.