I was recently contacted for the use of my Star Wars Sith BBQ illustration. I'll be honest, aside from Josh Frost's book that it's used in, I never thought in a million years that this illustration would see the light of day to be used for anything else. But I've been proven wrong. Sergej Grigojrev emailed me with the request of using the illustration for none other than his Star Wars Barbeque in the festival named "Let There Be Night." All six films will be screened with him and his friends cooking up some delicious foods. How fitting is that!

He quickly sent over the final poster and it came out thus so: 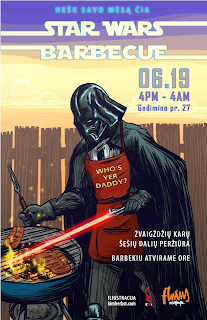 Super awesome, I'm glad to be a part of it!

Very cool. I love it.