Every year there's apparently an enormous Charles Dickens Fair in San Francisco during the holidays. People dress up in the clothing from the author's era and speak with old English accents, and so on. The Boyfriend and I went for the first time ever this year! One great plus was there was a 'Pre-Raphaelite Life Drawing' session that took place in a room entitled, "The Adventurers Club." The theme was primavera, so tons of fake flora were around, and the model adorned herself with a wreath-crown. They supplied us with some pads of paper and pencils (though no erasers, aiya, don't make any mistakes!!) and we got to work on two different poses that were about 10-15 minuets each. Lots of fun! 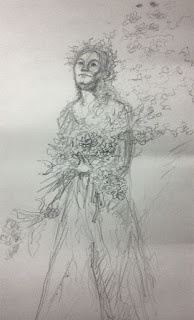 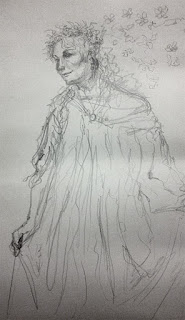