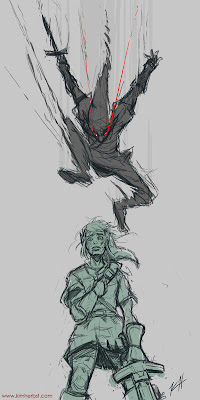 Just a little doodle from last night. Maybe I'll get time to complete it one day?

I grew up with just an NES that belonged to my older brother. Zelda II: The Adventure of Link was the 2nd Zelda game, and a side-scroller. Apparently not many people like it compared to any other Zelda game. That’s fine, but hey, I liked it.  It’s the first appearance of Link’s shadowy counterpart. As a really little kid, I thought this was an incredible thing!  I thought WOW, plot twist. You went through all of this fighting, this silent warrior who needs to save the world, and you now have to take on YOURSELF. Are you good enough to fight a mirror version of yourself?! HE KNOWS ALL YOUR MOVES. AHHH!

As an adult that’s made art and animations for games, a second thought has occurred to me: HOW BRILLIANT! This character has all of the same animations as the Player, LOOK AT HOW MUCH TIME IS SAVED. …Sad. I know.
Posted by Kim Herbst at 1:14 PM