I kind of think this particular drawing-day subject is full of crap. Because every one of my favorite books has been developed into a film. From Lord of the Rings, Do Androids Dream of Electric Sheep (Bladerunner), Harry Potter, to even children's books, like Roald Dahl stories, or one of my faves - Bridge to Terabithia. I went through most of my bookshelf with much frustration. 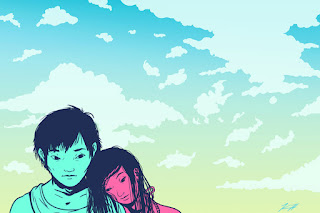 I chose Socrates In Love(spoiler), which my boyfriend gave to me a few years ago when he was abroad in Japan. It's an incredibly sad but honest story about a high school boy and girl named 'Saku' and 'Aki' respectively.  This has been adapted into a movie as well as television drama and a freakin' comic. BUT HEY I NEVER SAW ANY OF THOSE, SO SCREW YOU 30-DAY DRAWING CHALLENGE.