I don't know what it is with me. I either draw origami cranes, or people cutting their hair. It's a recurring theme. I think it's because I've cut my own hair since entering college to save money every year. 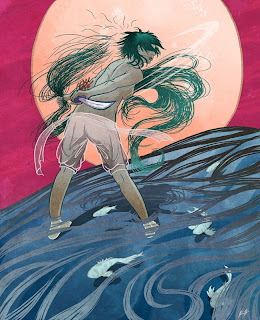 I feel like there's nothing greater than a person that's comfortable enough with their own image that they're not attached to their hair. I get frustrated when I hear women say they're terrified a hairdresser will make them 'look like a boy' if they cut their hair short; gain some confidence!

Granted, it's so fascinating that people can hold so much emotional baggage in hair. It becomes a permanently attached security blanket, fastened to the skull. And it can reduce someone to tears to literally separate that connection to these tendrils that were present for all those meaningful milestones in the past. It can take months to grow, but mere seconds to rid yourself of those strands!
Posted by Kim Herbst at 11:05 PM

I just got my hair cut short again Amelie-style :) Power to the froufrou hair!