Okay....I uh... got carried away and I guess I missed a few steps and plowed through this. So before this, I laid in all of the flats which makes it easier to color the illustration in general. 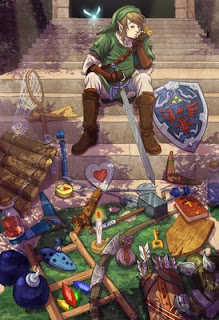 In this final image, I placed a shadow and highlight on the objects as well as on Link. He also has his lil helper/buddy/guide/nuisance/whatever you'd like to refer to her as next to him. (Sprite, for all you SUPER old-school people [by the way, never speak of the cartoon that was shown on TV back in the 80s as much as you want to say it was awesome, for all that is good in the world don't revisit it], or Navi for you newer folk). On top of some of the objects, a texture's been put over it, generally if the items are made of metal, sometimes wood. Link also has a bit of texture put on his clothes so he's not so super digital-flat-looking. There's secondary top grass laid out beside the objects so they 'sit' on the lawn better. And then a secondary shadow for some uh...foliage that isn't pictured to just break up the image in some spots. Light that's creating the shadows is also coming from the top of the image because it tends to break through between leaves naturally for actual trees.

I might tweak with it some more... but that's all for now! The hands are healing quite nicely, but still have a long way to go. I'm impressed I got this much done already!
Posted by Kim Herbst at 7:58 PM

WOW! looks awesome!!!!
the shadows of the trees do it for me!

wow nice piece! one of my favorites you've ever done.

I think the shadows really brought everything together. They really liven up the background and the shadows and highlights in Link really make everything much more consistent. Great work!

yes! the shadows! the lighting depth makes my eyes giddy.