Sneak peak sketch of my piece that will be in the Autumn Society's 8-Bit and Beyond Video Games Art Show. 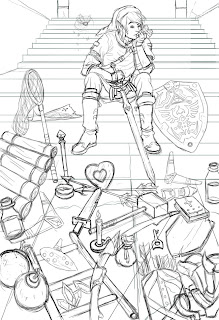 That's gonna be a heck of a lot of coloring.

I love The Legend Of Zelda (seriously though, who doesn't?). I probably just like it for a trifling reason like... because Link doesn't even have his name in the main title of his OWN game. He's that nice of a hero.

I didn't choose all of the items from one particular game because I've played and enjoyed a bunch of them (yeah, even the side-scrolling Zelda II one that... no one seems to like...) and there were too many neat items to take from one game only. I like to think he's made quite the collection after his reign of over 20 years and I always wondered how the heck that lil elf-like guy carried all this stuff around. Especially in the first one. A mini-raft AND a stepladder?? Poor guy!
Posted by Kim Herbst at 12:15 PM

Hahaha maybe he just has a tunic with magic pockets??

On a related note I just watched this video about Zelda's timeline today! weeiiirddd